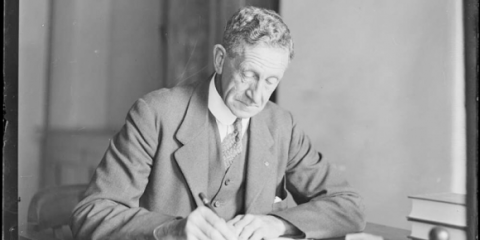 At 34 years old, Robert Garran became Australia’s first public servant. He was a lawyer who loved poetry and had a gift for languages, and towered physically over the people around him.

Fresh off the back of his law degree, Garran worked on drafting Australia’s constitution in the late 1800s. That work gave birth to the Commonwealth of Australia, the federal Parliament and our national public service.

But Garran didn’t like to be called our first. He felt that title should go to the officers of 6 state departments who automatically became federal employees when the constitution was established.

However on 1 January 1901, he did become the first head of an Australian government department, the coordinator of our first election and writer and editor for the primary source of public information about current laws.

As head of the Attorney-General’s department, he also went on to serve 16 different governments and 11 Attorneys-General — a 30-year record for service which none have met since.

Garran understood the Australian people would shape the constitution he drafted. Before it passed into law, he wrote:

‘The nation will be a nation, not of clauses and sub-clauses, but of men and women; and the destiny of Australia will rest with the Australian people rather than with the Australian Constitution. The work now in hand – the making of a Constitution – is great and important; but it is the beginning, not the end.’ Robert Garran, The Coming Commonwealth, 1897

It is through his colleagues that we see him and his role as public servant best reflected.

His successor in the Attorney-General’s Department, Kenneth Bailey, praised his ‘sense of proportion and moderation, capacity for enthusiasm without fanaticism, fellowship without loss of dignity and reserve.’

Fred Whitlam was a former employee who went on to be Australia’s chief solicitor. He described conversations with Garran as ‘exhilarating’:

‘…discussion was free, subject only, of course, to the limits of relevance; there was, on his part, no restriction to orthodoxies or conventional thinking but a hospitality to all ideas that might have bearing on the problem in hand, an enlightened weighing of pros and cons, and a firm choice of the course to be pursued.’

To this day, Garran’s qualities can be seen in the public service. As Australia’s 25th Prime Minister John Howard said:

‘I mentioned the recognisable characteristics of the service handed down through the last 97 years since Sir Robert Garran. Among those characteristics there are qualities and values which it is the duty of governments and public servants alike to guard and preserve.’

Our thanks to the Hon Justice Stephen Gageler of the High Court of Australia whose paper (PDF 264KB) is a vital source for this story.

You can also read Garran’s online biography, speeches from the annual lecture in his name and Gough Whitlam’s address.